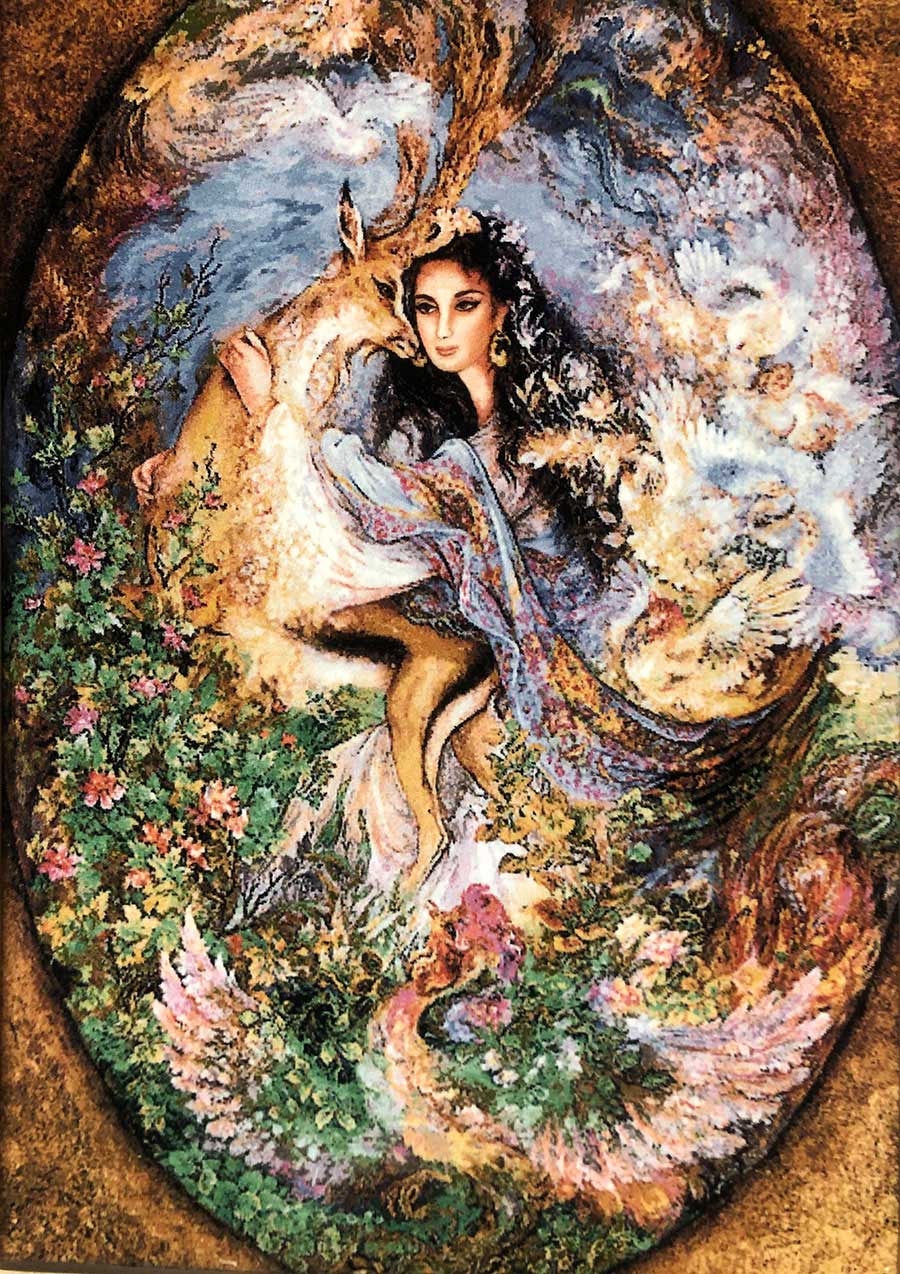 Persian Rugs and the art of carpet weaving existed in Persia (or Iran) in ancient times, according to evidence such as the 2500-year-old Pazyryk carpet, dating back to 500 B.C., during the Achaemenid period. The first documented evidence on the existence of Persian carpets comes from Chinese texts dating back to the Sassanid period (224–641 AD). This art underwent many changes in various eras of Persian history to the extent that it passed an upward trend before the Islamic era until the Mongol invasion of Persia. After the invasion, the art began to grow again during the Timurid and Ilkhanid dynasties.[1]

With the passage of time, the materials used in carpets, including wool, silk, and cotton, will decay. Therefore archaeologists are rarely able to make any particularly useful discoveries during archaeological excavations. What has remained from early times as evidence of carpet-weaving is nothing more than a few pieces of worn-out carpets? Such fragments do not help very much in recognizing the carpet-weaving characteristics of the pre-Seljuk period (13th and 14th centuries AD) in Persia.

The Pazyryk Carpet, the oldest known surviving carpet in the world, 5th century BC.

The exceptional Pazyryk carpet was discovered in 1949 in an archaeological excavation in 1949 in the Pazyryk valley, in the Altai Mountains in Siberia. The carpet was found in the grave of a Scythian prince. Radiocarbon testing indicated that the Pazyryk carpet was woven in the 5th century BC.[14] This carpet is 283 by 200 cm (approximately 9.3 by 6.5 ft) and has 36 symmetrical knots per cm² (232 per inch²).[15] The advanced technique used in the Pazyryk carpet indicates a long history of evolution and experience in weaving. It is considered the oldest known carpet in the world.[16] Its central field is a deep red color, and it has two wide borders, one depicting deer and the other Turkish[citation needed] horsemen.

Wool is the most common material for carpets, but cotton is frequently used for the foundation of city and workshop carpets. There is a wide variety in types of wool used for weaving. Those of which include Kork wool, Manchester wool, and in some cases even camel hair wool. Silk carpets date back to at least the sixteenth century in Sabzevar and the seventeenth century in Kashan and Yazd.[citation needed] Silk carpets are less common than wool carpets since silk is more expensive and less durable; they tend to increase in value with age. Due to their rarity, value, and lack of durability, silk carpets are often displayed on the wall like tapestries rather than being used as floor coverings.

The weaving of pile Persian rugs is a difficult and tedious process which, depending on the quality and size of the rug, may take anywhere from a few months to several years to complete.

To begin making a rug, one needs a foundation consisting of warps: strong, thick threads of cotton, wool or silk which run the length of the rug and wefts similar threads which pass under and over the warps from one side to the other. The warps on either side of the rug are normally combined into one or more cables of varying thickness that are overcast to form the selvage.

Weaving normally begins by passing a number of wefts through the bottom warp to form a base to start from. Loosely piled knots of dyed wool or silk are then tied around consecutive sets of adjacent warps to create the intricate patterns in the rug. As more rows are tied to the foundation, these knots become the pile of the rug. Between each row of knots, one or more shots of weft are passed to pack down and secure the rows tightly.

Depending on the fineness of the weave, the quality of the materials, and the expertise of the weavers, the knot count of a handmade rug can vary anywhere from 16 to 800 knots per square inch.

When the rug is completed, the warp ends form the fringes that may be weft-faced, braided, tasseled, or secured in some other manner.

Please call us at: